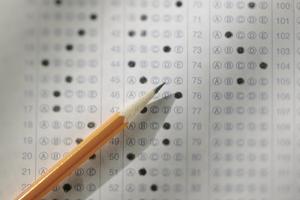 What do we want our graduates to look like? Imagine him/her with world-class knowledge in language arts and math, multi-lingual and adept in STEM education. Picture that graduate as the consummate problem solver, communicator and collaborator.  Now, see him/her as one of the highest integrity, self-direction and interpersonal skills.

Our state assessments are more challenging now than they have ever been. They are based on the S.C. College and Career Ready Standards which are designed to determine if a student is ready to enter college or the workforce and carry with them all the aforementioned attributes.

We assess career readiness with the Ready to Work assessment. It is the test which supplants “Work Keys”. Though uncertain of the rigor by comparison, if we contrasted the two based on test scores, we’ve realized a 5.5 percent increase in the number of 11th graders who are ready to enter the workforce. Once we’ve given more attention to the soft skills such as positive attitude and communication skills, we will likely see a greater upsurge.

With our End of Course Examination Program (EOCEP) we test high schoolers and some 8th graders. We’ve realized a 6.6 percent increase in U.S. History, which was previously our lowest area. At the middle school we’ve attained a 2.5 percent increase in English I. An area for growth for us based on our current scores is Algebra I.

As you know, SC Ready tests our 3rd-8th graders in the areas of ELA and math.  In ELA, our 6th graders are up by 8 percent and half our students exceed or meet the standards in ELA. While the students are moving from meeting to exceeding, we have plans to place greater emphasis on areas where students decreased a proficiency level.

Just as in ELA, in math there was a significant increase in the percentage of students going from meets to exceeds. We will continue to work to increase the scores of those who are not ready for the next grade level based on this year’s assessment.

We aren’t where we want to be but we are certainly not where we once were…and we aren’t in this alone. Across the state, there has been an increase in the percentage of students not meeting state standards which is often indicative of a matter of measures rather than “know how”. To help us give you a better picture of where we are, we’ve compared our scores with schools like ours based on a poverty index between 90-93 percent. Of those schools, we scored higher in three or more areas. Some of those schools were in more affluent districts.

As we’ve stated, the district is striving to become the standard, the example for this region and even the state. We appreciate these scores as they serve as the thermometer (they only tell us where we are). But our aim is to be the thermostat (controlling our destiny). We will continue to expand and push the lever forward for life beyond graduation and for our students to excel in a global society.